The Problem with Open Office Plans 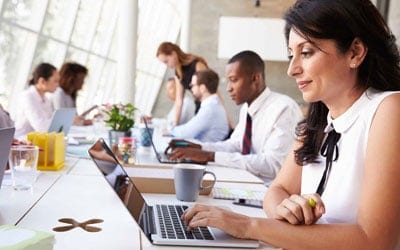 Open Floor Plans Have Become the New Standard for American Offices, but Is There A Better Way?

Just about anyone working in business today is familiar with open office design. Rather than carving up offices with cubicles or walls, the open office concept seats employees among each other in open, communal workspaces. Developed in Germany during the mid-20th century, open office plans really took root in the U.S. during the early 2000s, gaining traction among East Coast creative agencies, Silicon Valley tech firms, and other forward-thinking companies. Today, open office is the norm: roughly 70 percent of American offices use an open floor plan. 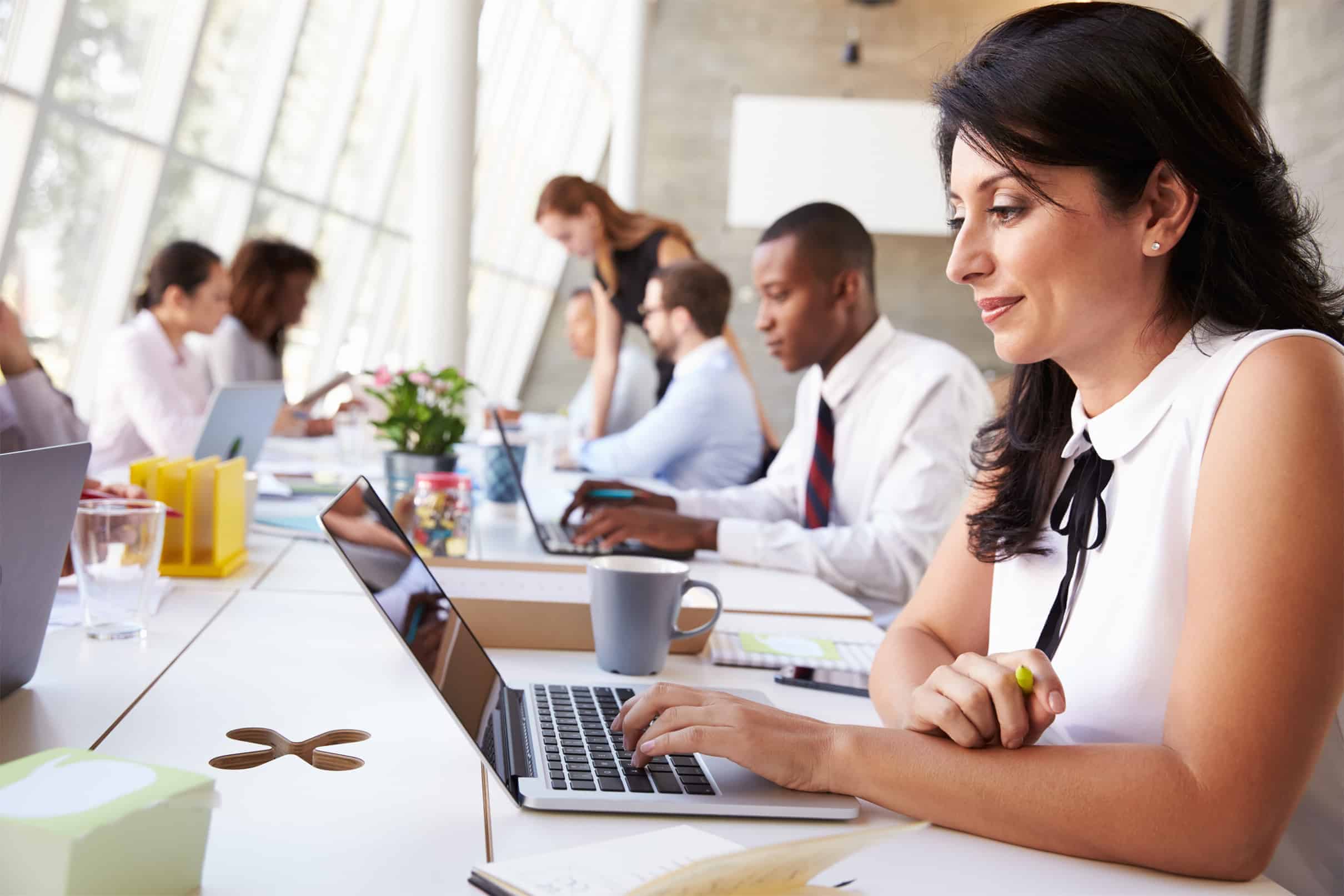 As open offices have become more established, however, the cracks in the design have begun to show. While the concept’s proponents contend that it encourages collaboration, camaraderie, flexibility, and comfort, employees complain about recurrent distractions, a lack of privacy, and a feeling of exposure in the workplace. Moreover, studies appear to disprove many of its touted benefits, indicating that open offices can actually lead to lower productivity, less collaboration, and damaged employee morale.

As younger generations of talent chafe at the open office concept, and evidence continues to mount against it, employers will need to find new designs that keep them competitive in today’s business climate. In the last few years, designers have begun to test a variety of new plans that aim to dispense with the negatives of open office floor plans, while optimizing their benefits. Below, we’ll talk more about the pros and cons of open office floor plans, and we’ll discuss promising alternatives to their one-size-fits-all approach. 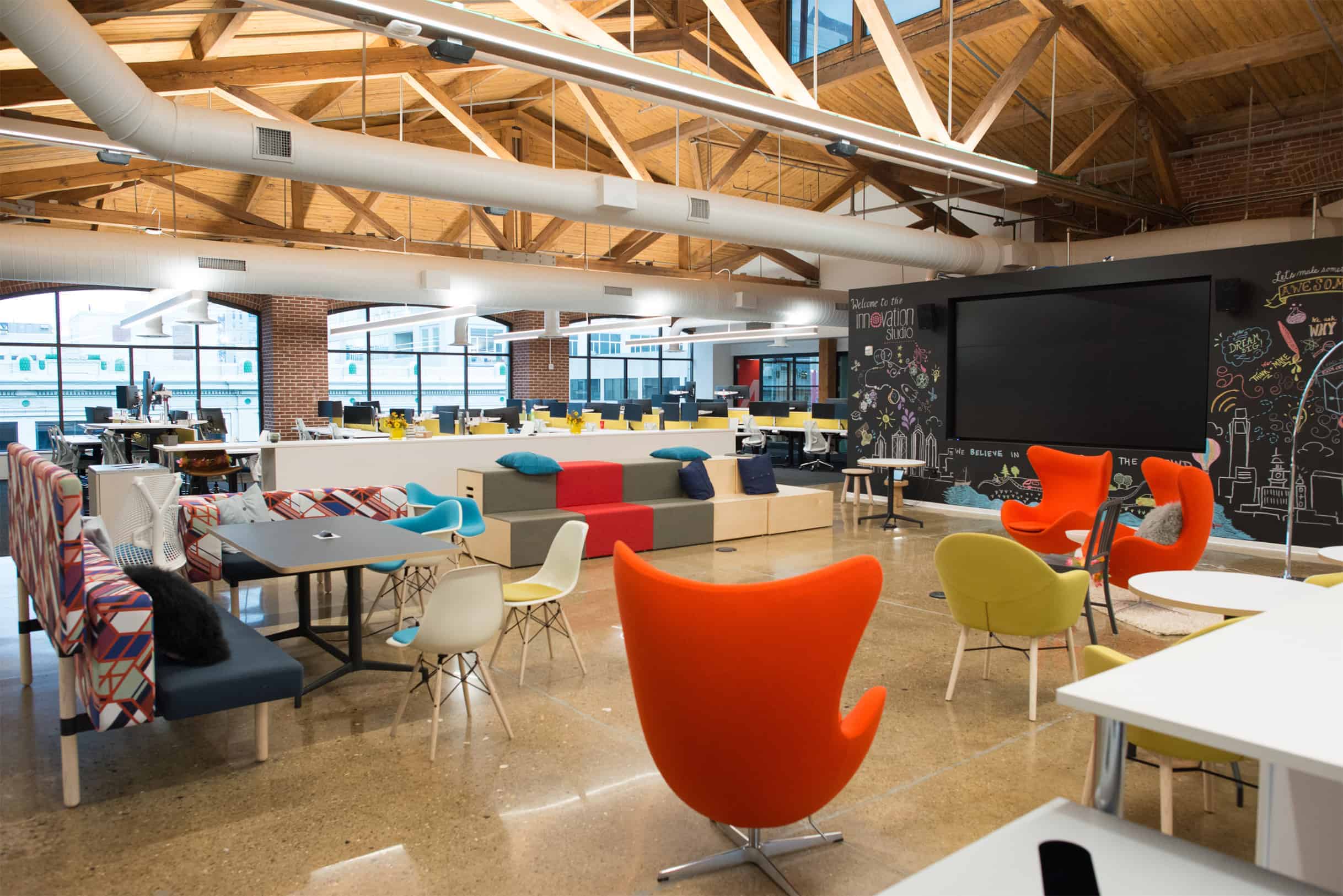 The Pros of An Open Office Design

Open offices were introduced to correct the limitations of private-office or cubicle-reliant designs in an evolving business culture. Separating employees from each other, it turned out, stifled their ability to collaborate and promoted an unhealthy, individualistic office culture. Supporters of the design, mostly among management, believe that it solves these problems in many ways:

The Cons of Open Office Design

As open office plans have been broadly adopted, many employees have raised certain grievances with the concept. Some features have directly backfired, doing the opposite of their intended benefits, while in other cases entirely unforeseen drawbacks have arisen. Here are some common complaints: 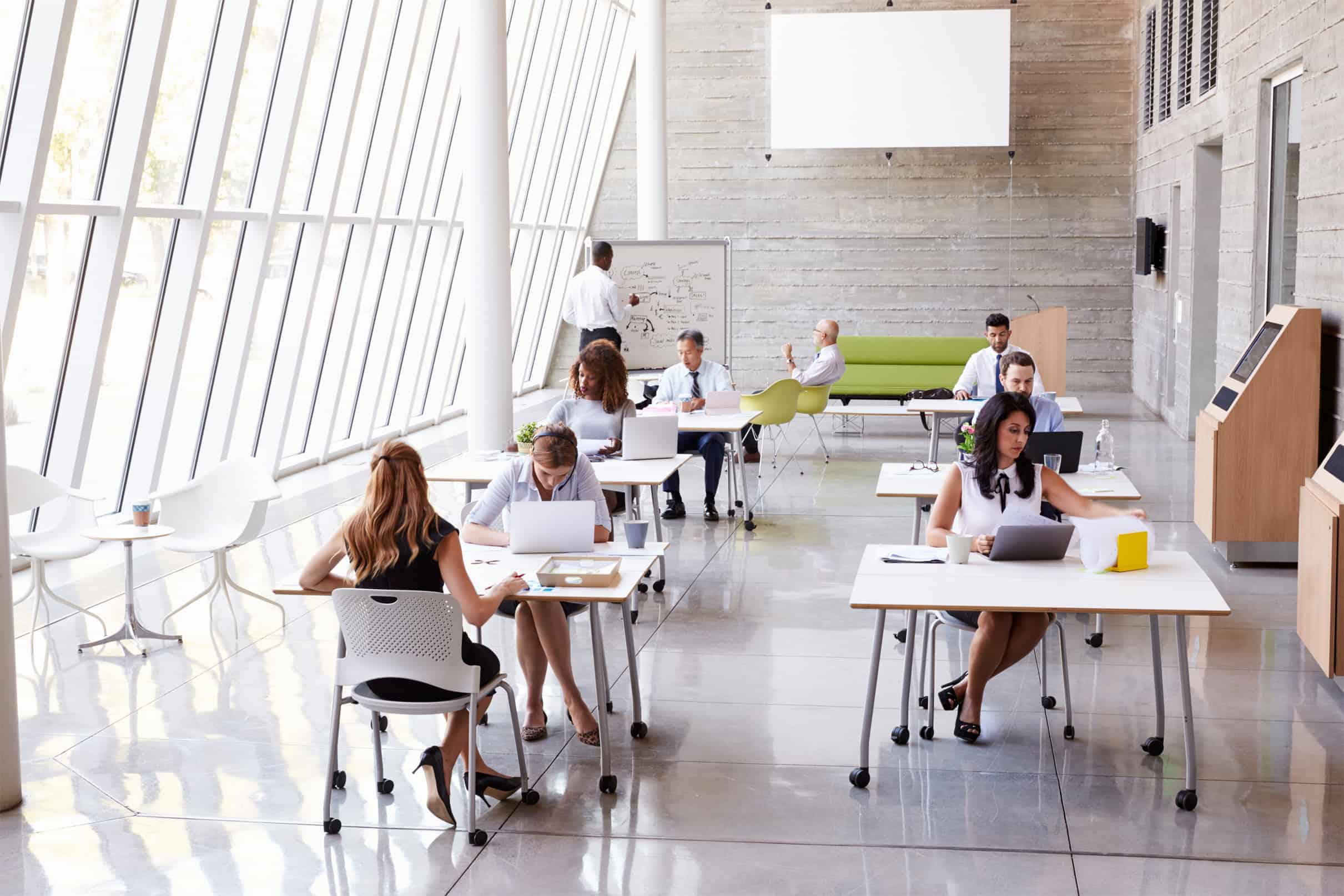 The Harvard Study of Open Workspaces

In a recent study, researchers from Harvard University set out to empirically measure the effects of open offices on employee behavior. Do they really facilitate collaboration? Do they increase productivity? Do they boost morale?

To the contrary, what they found was that “rather than prompting increasingly vibrant face-to-face collaboration, open architecture appeared to trigger a natural human response to socially withdraw from officemates and interact instead over email and IM.” In short, claims of increased collaboration, communication, and camaraderie were all flat wrong. Collaboration and morale actually decreases in an open workplace.

With this evidence, employers have begun to weigh the complaints of their employees more heavily against the accepted wisdom of open workspaces.

Impacts of Open Offices on Women

One final—and crucial—consideration in the open office debate involves its disproportionate impact on women. As we noted, many employees complain about a feeling of exposure and a lack of privacy under open floor plans. For men in the workplace, that feeling can be irritating and demoralizing. For many women, however, it can be downright threatening. 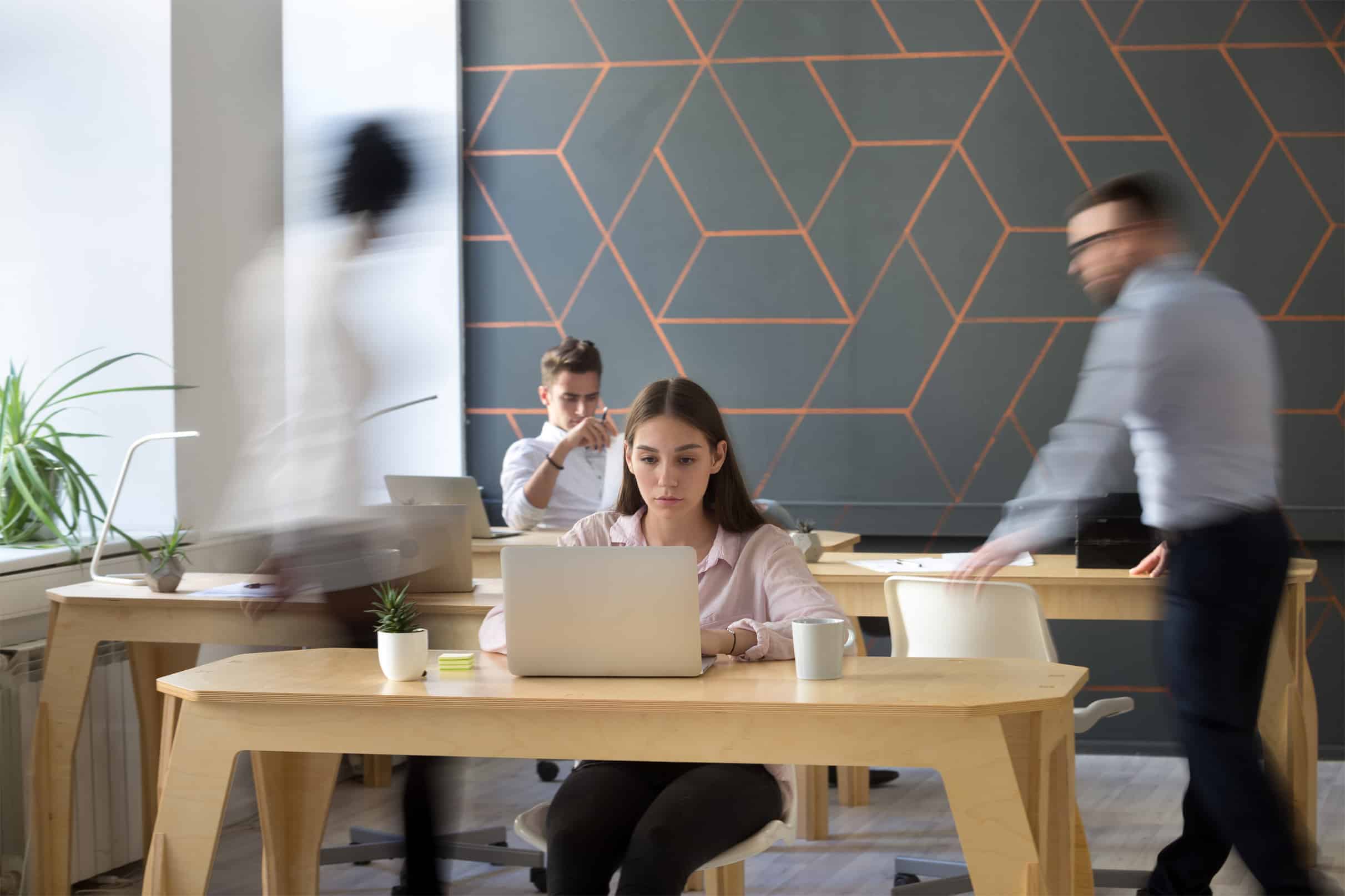 The rise of the #metoo movement has made it clear that employers can no longer be complacent about maintaining a hostile environment for women. If American companies don’t take seriously the demands of their female employees, they will drive away substantial numbers of their talent and be scrutinized for their participation in a culture that makes women feel unwelcome and unsafe.

Talent Retention and The Way Forward from Open Office Designs

What the open office concept got right, at least in spirit, was the central importance of talent in the workplace. A company’s people are its most crucial resource, and if its people are unhappy, they will leave for better opportunities. In many cases, that means better workplaces.

Despite conventional wisdom, the evidence is building that employees aren’t happy in open offices. If employers want to stay competitive, they need to find solutions. Fortunately, recent years have a seen a great amount of innovation in workplace design, and new philosophies are emerging that have begun to address the drawbacks of the open office while maintaining its spirit of collaboration, flexibility, and employee morale. Below are some approaches that have begun to gain traction.

Agile working allows employees to choose from a variety of work settings depending on what they feel will best suit the task at hand. They may choose to finish up a lengthy report at a traditional desk, conduct a group project at a collaborative bench, or hold a brainstorming session in a breakout space, to name just a few options.

Many employees enjoy a sense of autonomy in an agile work environment, where they have the ability to choose the workspace that suits their needs, and privacy is always an option. It does have its challenges, however. The system only works if it’s implemented office-wide, so staff who prefer a more structured office setting cannot opt out. For this reason, it requires an entire culture shift in companies that are moving away from an open office or traditional floor plan.

Activity based workspaces are offices in which different spaces are set up to accommodate different tasks. They work well in agile work settings, as well as in team-based work environments, where teams use or “own” workspaces that meet their needs. Desks and workbenches facilitate individual or collaborative productivity; group spaces, such as huddle rooms or breakout areas, can host closed meetings or laid-back pitch sessions; phone booths can lend some privacy and focus to a client call. 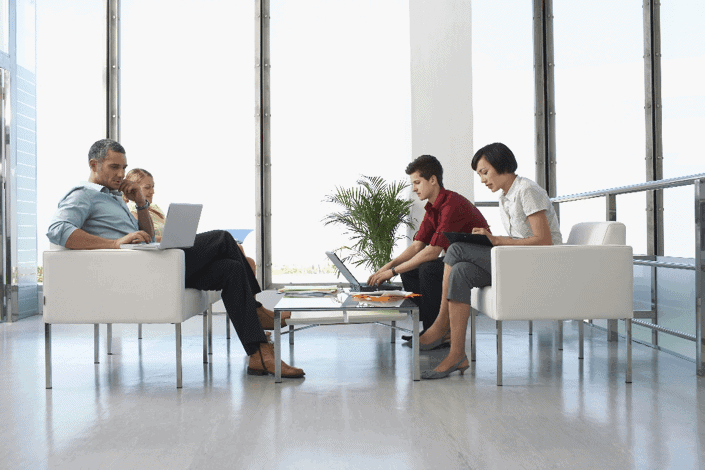 Also known as “hot-desking”, unassigned seating is another rising trend in contemporary offices. Under this plan, staff are not given permanent desks or work areas, but rather workstations are available on a first-come first-served basis. This scheme can provide similar flexibility to an agile or activity based workspace (and can be combined with both), while also optimizing space and promoting a clean-desk environment. It works best in offices where staff frequently work remotely. However, it can also be frustrating to employees who require a certain amount of routine and ownership over their work environment.

As more companies and employees turn against the open office trend, it has become clear that there is no single solution to modern office design. Rather, every given company requires just the right kind of flexible workspace that will fit its needs. Below are some options that your furniture dealer can provide to get the most out of your office.

These options and more can be applied in almost limitless combinations to maximize the flexibility and productivity of an office. You should work with your furniture dealer to decide just what kinds of workstations are appropriate for your company and its needs.

The open office floor plan rose quickly to prominence, but its day seems to be coming to an end. Companies are finding that the plan, which was developed to increase collaboration, actually has a tendency to stifle productivity and make employees unhappy. If companies want to stay competitive and retain top talent, they’ll need to find better, more flexible options in office design. As the decline of open office shows, there is no single solution to this challenge, but by working closely with a furniture dealer, companies can find just the right balance of collaborative, private, and dynamic workspaces to keep their people happy and productive.

Epilepsy Safe Mode
Dampens color and removes blinks
This mode enables people with epilepsy to use the website safely by eliminating the risk of seizures that result from flashing or blinking animations and risky color combinations.
Visually Impaired Mode
Improves website's visuals
This mode adjusts the website for the convenience of users with visual impairments such as Degrading Eyesight, Tunnel Vision, Cataract, Glaucoma, and others.
Cognitive Disability Mode
Helps to focus on specific content
This mode provides different assistive options to help users with cognitive impairments such as Dyslexia, Autism, CVA, and others, to focus on the essential elements of the website more easily.
ADHD Friendly Mode
Reduces distractions and improve focus
This mode helps users with ADHD and Neurodevelopmental disorders to read, browse, and focus on the main website elements more easily while significantly reducing distractions.
Blindness Mode
Allows using the site with your screen-reader
This mode configures the website to be compatible with screen-readers such as JAWS, NVDA, VoiceOver, and TalkBack. A screen-reader is software for blind users that is installed on a computer and smartphone, and websites must be compatible with it.

We firmly believe that the internet should be available and accessible to anyone, and are committed to providing a website that is accessible to the widest possible audience, regardless of circumstance and ability.

To fulfill this, we aim to adhere as strictly as possible to the World Wide Web Consortium’s (W3C) Web Content Accessibility Guidelines 2.1 (WCAG 2.1) at the AA level. These guidelines explain how to make web content accessible to people with a wide array of disabilities. Complying with those guidelines helps us ensure that the website is accessible to all people: blind people, people with motor impairments, visual impairment, cognitive disabilities, and more.

This website utilizes various technologies that are meant to make it as accessible as possible at all times. We utilize an accessibility interface that allows persons with specific disabilities to adjust the website’s UI (user interface) and design it to their personal needs.

Additionally, the website utilizes an AI-based application that runs in the background and optimizes its accessibility level constantly. This application remediates the website’s HTML, adapts Its functionality and behavior for screen-readers used by the blind users, and for keyboard functions used by individuals with motor impairments.

If you’ve found a malfunction or have ideas for improvement, we’ll be happy to hear from you. You can reach out to the website’s operators by using the following email

Our website implements the ARIA attributes (Accessible Rich Internet Applications) technique, alongside various different behavioral changes, to ensure blind users visiting with screen-readers are able to read, comprehend, and enjoy the website’s functions. As soon as a user with a screen-reader enters your site, they immediately receive a prompt to enter the Screen-Reader Profile so they can browse and operate your site effectively. Here’s how our website covers some of the most important screen-reader requirements, alongside console screenshots of code examples:

We aim to support the widest array of browsers and assistive technologies as possible, so our users can choose the best fitting tools for them, with as few limitations as possible. Therefore, we have worked very hard to be able to support all major systems that comprise over 95% of the user market share including Google Chrome, Mozilla Firefox, Apple Safari, Opera and Microsoft Edge, JAWS and NVDA (screen readers), both for Windows and for MAC users.

Despite our very best efforts to allow anybody to adjust the website to their needs, there may still be pages or sections that are not fully accessible, are in the process of becoming accessible, or are lacking an adequate technological solution to make them accessible. Still, we are continually improving our accessibility, adding, updating and improving its options and features, and developing and adopting new technologies. All this is meant to reach the optimal level of accessibility, following technological advancements. For any assistance, please reach out to